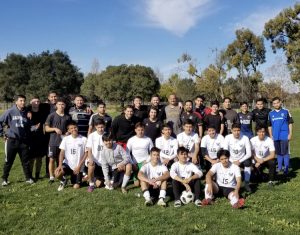 The KSJC Boys Soccer Program hosted their 7th Annual Alumni Game on Friday, January 4th.  It was the highest turnout of all 7 years with 19 former coaches and players (Gerardo Bejinez not pictured) coming out to take on the current team.  At the end of the day, KSJC’s Varsity Team ended up winning the game 8-4.  The first half was tight, finishing with a 3-2 advantage for the Varsity Team.  The Alumni looked formidable early with a Barca-like second goal featuring build up from Carlos Osorio, Coach McCormack, and Coach Gudiel, but ultimately fell short after Coach Topete switched sides, transformed into David De Gea, and made 10 second half saves to hold the alums to just 2 second half goals.  This brings the overall record to Alumni 4- KSJC Varisty 3, with the Alums holding a slim advantage.  The Varsity Squad has won the last three matches.  Until next year!