Fall season came and went before our eyes as fast as our runners ran through each course.  On the volleyball side, it was the most successful season in history.  As we kick off another season, we look back at fall season for all the accomplishments that were made.

5 first and second all league selections

2 team qualifications to CCS – first time ever competing in div. IV in any sport for KSJC 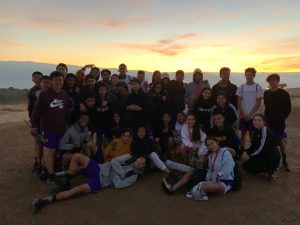 Cross country had one of the most successful seasons despite losing many key seniors and having different coaches this year.  KSJC welcomed new XC coaches, Coach Tamayo and Coach Diaz this season and Coach Dela Rosa as the newly appointed head coach (assistant two years before).  This year, KSJC had a community run to welcome in PSAL associate members KIPP Navigate, attended Jackie Henderson Invitational, and ran the annual Artichoke Invitational.  It was a great pre-season for the Wolfpack as they got acclimated and welcomed many new runners to the team.

Captains Fabian Gonzalez, Kyle Kinard, Andre Pham, Maritza Pinedo, and Claire Hsu lead the way for the team in ensuring the culture set was one of hard work and fun.  Day in and day out, the Wolfpack ran miles, conditioned, and challenged themselves with hill after hill.  Because of this, it prepared them for a great league season.  This was the first year ever KSJC competed as a division 4 team along with LCPA and Design Tech in the league.  This means, for our school, typically running against schools with larger enrollment or talent if we were to qualify for CCS.

The boys had an impressive league run.  Despite the loss of key runners, time and time again, the pack proved how strong of a team they were having several different runners place first for the team.  They always came in with the first four runners within one place of each other.  On the girls side, it looked an uphill battle with a team diminished in numbers with only 8 girls consistently being able to run.  Despite all of these setbacks, the boys and girls qualified for CCS once again and not only that, they are the very first teams ever to qualify for CCS for KSJC in division 4. 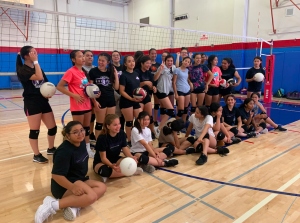 Volleyball had its most successful season in its history.  Not only did it boast one of the most successful league records, but they took home their first ever trophy and banner for KSJC.  The stars aligned for this was the first year ever that PSAL split into 3 divisions to try and make for a more equitable league.  South, North, and Bay divisions drew the line amongst the schools participating in volleyball.

Volleyball started with a record amount of girls coming out for tryouts.  When it came down to it, both JV and varsity rosters were made and the girls were off to make history for the school.  This was no easy feat as rivals DCP-Alum Rock and Cristo Rey had great seasons and teams also.

Volleyball saw three coaches return in Monagle, Christianson, and Reza.  They welcomed new coach, Coach Yoro as the JV assistant.  JV had a fantastic season!  They played sister school KIPP Navigate in two matches and welcomed in a crowd unlike this school has seen before.  With a mix of veteran and younger players, the team improved vastly and grew close as a team ensuring that the volleyball program continues to produce and develop its players from the bottom up.

For varsity, it could not have been written any better.  Towards the end of the season, there seemed an interesting three-way tie situation arising in the South division between DCP-AR, Cristo Rey, and the Wolfpack of KSJC.  It all came down to the last league game of the season (which also happened to be senior night).  KSJC needed to win this game to win the whole league and take home the hardware.  Lose, and they would’ve been pushed to third place because of tie-break rules.  Things seemed well as the Wolfpack were up 2 sets to 1.  Cristo Rey had a sudden surge and pushed it to a 5th and final set.  With the score being 14-12, Vivian Ha took the last and final serve.  A  Cristo Rey player passed it but it was too much for her to control.  The ball shanked off her arms and hit the ceiling.  With that, KSJC was awarded their 15th point of the 5th set and the gym went wild.  KIPP San Jose Collegiate took home their first-ever volleyball league championship.

Great job fall athletes!  Congratulations on all you have accomplished this season!